Just to whet your appetite for Tuesday’s lecture-recital of music for violin and harp, here are some pictures of Nicoline and Rosanna in action in day centres in Kingston recently: 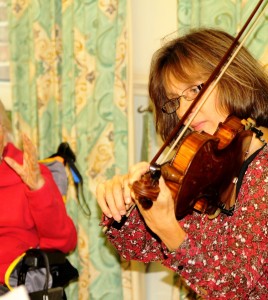 Nicoline Kraamwinkel, Dutch born, studied in the Hague and London. She has worked with many of the chamber orchestras in London, is a member of the London Mozart Players and works for Garsington Opera. Her performance of Brahms’ Violin Concerto in the Concertgebouw Amsterdam was televised. She is a founder member of the Chagall Piano Trio. 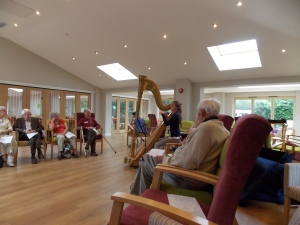 Nicoline’s daughter Rosanna Rolton is an advanced student at the Royal College of Music. She is a member of the European Union Youth Orchestra with whome she has toured widely throughout Europe and has won many competitions, most recently the International Harp Competition in Italy. Rosanna is currently making her first CD and has already given many recitals including in the Royal Festival Hall and at last summer’s Three Choirs Festival, and also in Italy.
If you have to miss Tuesday at Whitgift House then you might like to catch Nicoline and Rosanna in Bromley on Wednesday 28 Octoberat 2.30p.m. for Musical Offerings in the Church Room at St Mark’s Church, Westmoreland Road, BR2 0TB when afternoon tea and home-made cakes will be served.
Entry to non-subscription holders is £10 on the door and contributions towards the refreshments help to support these lecture-recitals.