Supported by the Lucille Graham Trust, the Red Socks Charitable Trust and the schools

Since Christmas Scott Bywater and I have had the privilege of delivering workshops at three schools for children with profound and multiple learning difficulties. In January and February we visited Rutherford School in South Croydon and the Surrey Teaching Centre at the Children’s Trust in Tadworth. Then, in March, we returned to Tadworth for a further two days at the School for Profound Education.

Staff, pupils and parents were moved and uplifted by your sessions and we had so many positive comments. We were so touched at the effort you put in bringing so many instruments and building in responses from one week to the next, not to mention your totally thorough planning and evaluations.

Scott and I had first devised our percussion project at the behest of Stephen Haylett, Music Therapist at Rutherford School. Most of the children at Rutherford have no access to spoken language, suffer some degree of visual impairment and are nearly all wheelchair users, and Stephen had suggested that we could engage them initially by appealing to their sense of touch. 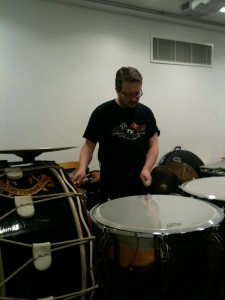 Our starting point in devising the project was that we would explore different textures for their sound-making potential, show ways that staff and children together could create simple percussion instruments in class, and then use the children’s own shakers and drums in our hands-on music-making sessions. It was delightful to see the range of instruments, mostly shakers, that resulted from this, including some that were beautifully decorated with beads or paper butterflies, and even two water bottles that had become a tiger and a leopard, complete with eyes and a tail! However, it has to be said that in the end it was the quality of Scott’s many large and exciting orchestral percussion instruments that carried the sessions, and the compelling power of  some great music, chosen from classical and modern repertoire, including such percussion-rich warhorses as Ravel’s Bolero and Bizet’s March of the Toreadors.

Throughout our days at all three schools the greatest thrills were from experiencing the wonderful range of percussion instruments that Scott piled into his van for each visit. We had always planned to make a big feature of the vibraphone, and the tremulous magic of its unique sound did indeed fascinate many of the children. Some were able to see the vibraphone’s fluttering mechanism and one young lady accepted her own pair of beaters and joined Scott to play Twinkle, twinkle; others were able to join in by playing gentle chimes or bells that matched the mood of gentle pieces, including Chick Corea’s “Crystal Silence” that allowed each session a moment of repose. Progression from one visit to the next was difficult to guage at Rutherford School, but Stephen Haylett commented on the greater confidence that grew as children became familiar with us and the sounds we were making. It was especially exciting to see one pupil’s response to Scott’s bass drum; this is a boy who usually enjoys his music sessions, and on both our visits Scott was able to take direction from his increasingly excited gestures, mostly indicating “faster” or “louder” – the school staff said they had not seen him so animated for a long while!

I felt that the activities in which the responses of the children dictated the style, pace and direction of the music were most effective.  For instance, some of the groups seem to prefer a softer, more reflective style of music-making, using bells and chimes as the predominant musical texture.  Other groups revelled in boisterous and extrovert playing, especially when featuring cymbals, bass drums and timpani.  There were some wonderful examples of musical interaction between Scott and the children, enabling some of them to experience at close hand the vibrational and distinctive sounds of the larger percussion instruments.

Sharing activities together was also especially important to the children at the Surrey Teaching Centre, and we were able to develop ensemble work with several groups. We had been asked to support some curriculum work with a group of young people working at Key Stages 3 and 4 who were studying music from around the world, which we felt gave us a cue to hand out maracas, guiros, cabasas, a cowbell and an agogo and to layer rhythms in a Latin-American song, something we developed on our second visit into quite a sophisticated samba. Their teacher Cath wrote:

These sessions worked especially well for a student with severe memory difficulties and it was evident from her high level of independence and her animation in the sessions. CB

I was glad to be able to play melodies on my clarinet to suit the wide range of percussion sounds that Scott made available, but perhaps the most moving moment for me was to watch Scott working with the two boys at the Surrey Teaching Centre who had suffered tragic brain injury in accidents, helping each in turn to hold a stick and strike the kettle drum, and then wait for each one to initiate the next stroke with the tiniest flicker of a sign that this was what they each wanted to do.

We can’t thank you enough… come back again.

All our good wishes,I hope you continue to have fun with many more pupils, children, students, parents and staff for many years to come.

Admission by Programme:  £8 and £6 (concessions) Children will be admitted free of charge

All proceeds will be donated to Everyone Matters

We celebrated our AGM recently with two performances, generously hosted by two Bromley nursing homes, given by Katie Clemmow (oboe, cor anglais and piano) and Margaret Archibald (clarinet and voice). Each home generously welcomed groups of our own guests to share the occasion with their own residents and staff. This was a rather unusual kind of informal concert as we wanted to showcase some of our workshop activities as well as offering performances of well- loved tunes. We had taken care to warn each of the Entertainments Organisers in advance, and so eyebrows did not shoot up when we cajoled members of our audience into playing chime bars to accompany Greensleeves and then forming a percussion orchestra as backing for a Mozart Rondo.

Katie has summed up the day:

The AGM followed on from a joyful morning when we tried out some of our musical games (normally reserved for children) on residents of a care home, members of the board and staff. It was heartening to see how even the most incapacitated managed to join in the fun, sometimes with help from those more able. By the end of the session the whole room was buzzing, and everyone seemed drawn closer together within the spirit of participation. Music breaks down inhibitions and barriers and when coupled with Margaret’s undying enthusiasm, you end up with a very powerful force indeed. I am so proud to be part of this enterprise. (As you can imagine, this was followed on by a very positive AGM!)

(…what Katie doesn’t mention is that the AGM was held over a lunch of pub grub between performances!)

…and at the receiving end, the Entertainments Manager of Elmwood Nursing Home wrote:

Our residents were visibly uplifted by Margaret and Katie, they all thoroughly enjoyed joining in and taking part. Margaret’s enthusiasm is delightful and very catching – long may it continue.

Everyone Matters is now in its second year as a company and its first as a registered charity. As the months have flown by the journey has been exciting, constantly fascinating and sometimes frustrating but certainly never dull. Our Friends have offered us wonderful support and encouragement, giving us the courage and energy to jump through hoops and slash through red tape to get the charity up and running. Donations and standing orders from friends and well-wishers have made it possible to mount a number of informal concerts in nursing homes and clubs for retired and disabled people in addition to our main projects to date in schools for children with a wide range of learning difficulties. We completed our inaugural project in four outer London special schools thanks to the generosity of Jessie’s Fund and now, with the support of the Lucille Graham Trust, we are developing “Mood Music”, a new project especially devised for children with profound and multiple learning difficulties, taking it to schools in Croydon and Surrey.

When required by the Charity Commission to outline our objects in no more than 5000 characters the task seemed almost impossible, especially when we realised that this included spaces! However, the need to define our goals in this way proved very stimulating and it continues to inform the way that projects are devised, delivered and evaluated. One of our primary objectives is to take live music to people who would otherwise find it difficult or even impossible to access it. Collaboration is at the heart of every project and through a process of consultation each one is tailored to the needs of those taking part. Evaluation reports are completed by a project leader from Everyone Matters and by a key staff member at the host venue so that all concerned may learn from the experience. A particularly exciting development has been the introduction of our Young Artists scheme where young musicians are mentored by professional musicians from Everyone Matters to devise and rehearse an informal concert programme that they then perform together in a nursing home or day centre.

Each project and performance devised by Everyone Matters is inspired by a love of the great musical masterpieces that so enrich the professional lives of the musicians delivering them. It is our hope that everyone engaging with us will leave our projects having discovered some new piece of music or enjoyed taking part in some new musical experience.

As you can see from his comments in the next paragraph, Christopher Newport certainly seems to have had an interesting year (and by the way, it is important to note that the dressing gown in question was in fact a kimono and an important costume for performing a song from The Mikado!):

Everyone Matters – and they certainly do.
I always know that when Margaret asks me to do one of her events (they are not just concerts) I’m in for a fun time. According to the Musicians’ Union address book I play the French horn – according to Margaret’s list I play the French horn, tenor horn, hosepipe (when there isn’t a ban) and the piano. All the afore-mentioned fit into the boot of my car – N.B. the piano is electric, that is until we secure sponsorship from Steinway.
What we wear for each event is now becoming more and more sophisticated – it used to be smart casual or smart “posh”. Events are now so varied I’ve even accompanied Margaret in her dressing gown – please note, she was wearing the dressing gown, not me. What a great year – and charity status too.
Christopher Newport (Principal Horn, London Mozart Players)

This is the new website for Everyone Matters, a registered charity for music in schools and the wider community. The site is currently under construction and will fully launch later this month…